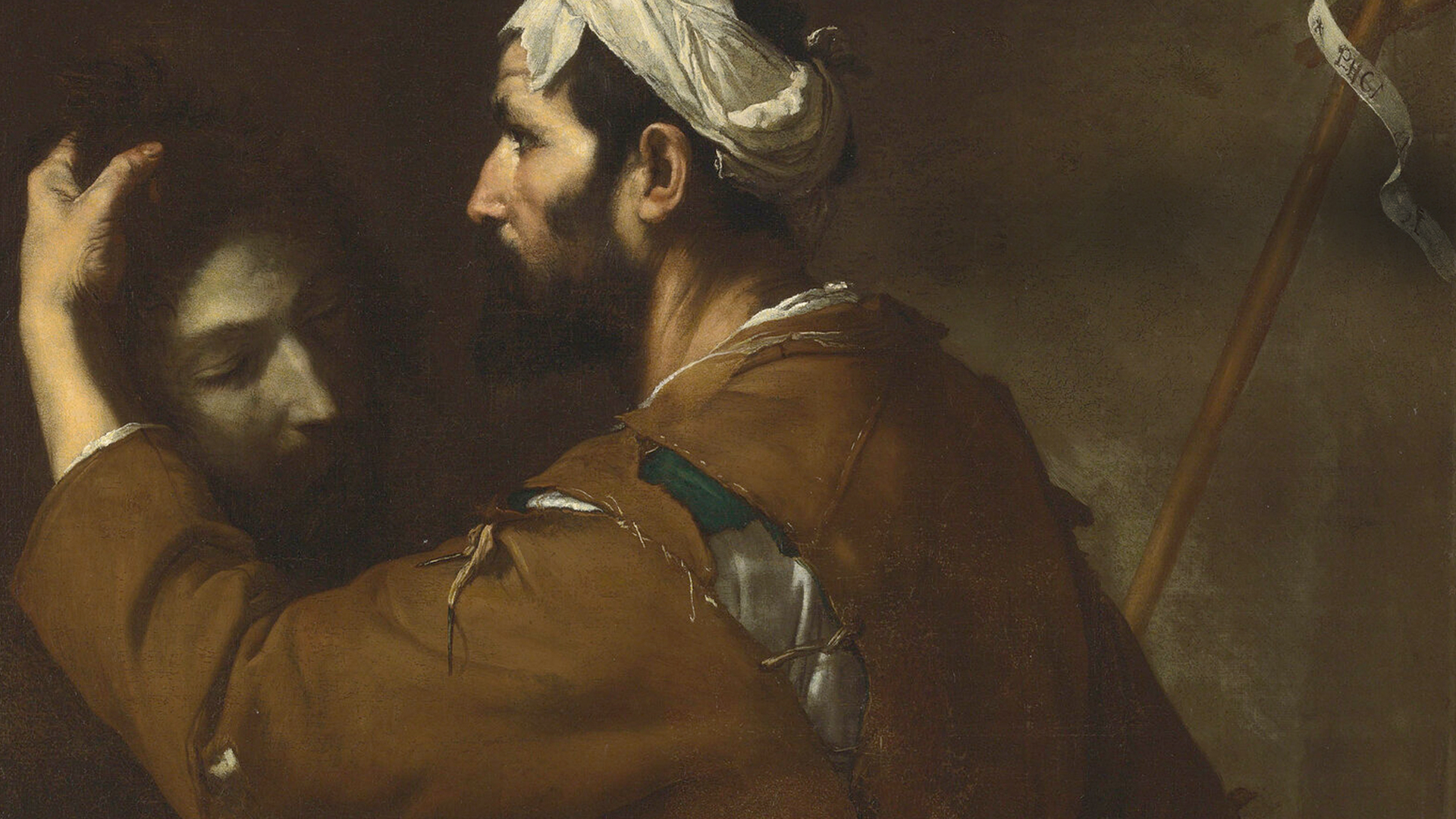 An Unmerry Christmas and a Headless Prophet: The Function of the Tyrant Trope in Matthew’s Gospel

By Mark Lamas Jr.September 9, 2021No Comments

An Unmerry Christmas and a Headless Prophet: The Function of the Tyrant Trope in Matthew’s Gospel[1]

The Herodian Family plays a more prominent role in Matthew than it does in any of the other canonical Gospels.  Matthew follows Mark closely in including the story of John the Baptist’s execution by Herod Antipas (as does Luke), but Matthew is unique in including the account of Herod the Great’s execution of the infant males of Bethlehem. Matthew is also the only Gospel to mention Herod’s son Archelaus. Even among casual readers of the New Testament, the deeds of these Herodians are well known and can be quickly assessed as despicable. But what significance might these stories have for Matthew’s earliest readers? After a quick summary of their dastardly deeds, we will consider an answer to this question that, to date, has received little consideration.

Matthew’s King Herod (or Herod the Great) looms large in Christian memory and retelling of the “first Christmas.”  Before the magi from the east meet Jesus, they meet the Roman appointed client king who schemes to find the newly born threat to his own power so that he might eliminate it.  He hopes to discover the location of the would-be child king from the magi themselves but is thwarted when they are warned in a dream not to return to Herod.  When Herod realizes he has been thwarted, he infamously orders that all male children in Bethlehem under the age of two to be killed—an act that brings mourning that Matthew compares to the mourning brought about by the Jewish exile to Babylon (see Mt 2:18). Through divine intervention, the infant Jesus and his family escape this atrocity and remain in Egypt until Herod the Great’s death.  After Herod’s death, Joseph returns from Egypt with his family, but because the former client king has been replaced by his son Archelaus, Joseph avoids Samaria and Judea and relocates to Nazareth. Matthew’s implication is clear, Jesus would be no safer under the son than he was under the father.

Later Matthew introduces his readers to a second son of Herod the Great, Herod Antipas, the tetrarch (“the ruler of a fourth;” Antipas ruled over Galilee and Perea which comprised one fourth of his father’s kingdom). Antipas is introduced by way of his assessment of Jesus, whom he mistakenly identifies as John the Baptist raised from the dead (14:1). This misidentification leads to a flashback that narrates Antipas’ execution of John.  Antipas has John arrested because of the prophet’s condemnation of Antipas’ marriage to his brother Philip’s wife, Herodias (14:2). Contra the parallel Markan episode, the Matthean Antipas wishes to kill John but does not because he fears the response of the people.  This restraint is overcome by a series of events that unfold at Antipas’ birthday celebration. At the celebration, the daughter of Herodias (Antipas’ new step-daughter) dances for Antipas and his guests. The dance pleases Antipas to such a degree that he grants his step-daughter anything she desires (whether the dance was sexual in nature is a debated point). At the instruction of her mother, the girl requests the head of John the Baptist on a platter, and so as not to be dishonored in front of his guests, Antipas grants the macabre request.  Again, the reader sees that the Herodian apple does not fall far from the tree.

The historical veracity of the Matthean Herodian family was once a subject of great debate (e.g., did Herod the great actually kill the infants of Bethlehem or was John’s death really the result of a birthday party gone awry contra Josephus?), but the issue of historicity seems to be of less important to more recent interpreters.  Of greater interest is the characterization of these figures and their function in the Matthean narrative.  For example, the characterization of Herod contributes to Matthean efforts to demonstrate the fulfillment of scripture in the life of Jesus, particularly through Jesus’ recapitulation of the story of Israel (e.g., the infant Jesus’ parallels with Moses, Jesus going into and out of Egyptian exile like Israel, etc.).  Also, Antipas’ execution of John, God’s penultimate prophet, functions as a foreshadowing of the execution of Jesus, God’s messianic king.

Yet, beyond these widely recognized literary functions, it has been rarely noted that in Matthew’s characterization of the Herodian family he seems to draw heavily on the common place tyrant trope.  The concept of the tyrant was well established in both the ancient Greek and Roman worlds.  Greek literature often distinguished between the good philosopher king and the evil tyrant. Roman hatred for tyrants was deeply ingrained in their historical and cultural memory, as the Roman Republic was created in response to the tyranny of Tarquinius Superbus (6th century BCE).  The tyrant featured prominently in novels, plays, histories, philosophical treatises, and political invective. In his treatment of Mark’s characterization of Herod Antipas, Abraham Smith provides four prominent features of the tyrant figure: 1) paranoia; 2) possession of a bodyguard; 3) displays of excess; and 4) interaction with a philosopher.  Yet, we could add a number of other features commonly associated with tyrants, including close association with vices, abrogation of law, injustice, and immoral behavior (murder, rape, incest, etc.). These common features of the Greco-Roman tyrant are prevalent in Matthew’s depiction of the Herodian family: 1) paranoia (Herod over an infant political rival/Antipas over John returned in Jesus; 2) the presence of philosopher figures (Herod with the magi/Antipas with John); 3) abrogation of law/injustice (Herod executing innocent children/Antipas arresting and executing the innocent John); 4) immoral behavior (Herod trying to deceive the magi in order to eliminate a political threat and the subsequent murder of infants/Antipas possibly being sexually aroused by the dance of his step daughter).

In my estimation, the Matthean evangelist has clearly depicted both King Herod and his son Antipas as tyrants. That early readers of the Gospel would perceive them as such seems certain.  But to what end does this characterization function?  Perhaps such characterization serves as a foil that magnifies the ideal kingship of God’s appointed king, Jesus.  Or perhaps, Matthew seeks to create parallels between the tyrants of Israel’s past (Pharaoh, Abimilech, Ahab, etc.)  and those of the days of John and Jesus. But our interpretive options expand when we consider the role of the tyrant trope in political invective, particularly in the use of figured speech.

Postcolonial theorists as well as those biblical scholars engaged in empire criticism have long recognized that in colonial/imperial settings the resistance of the powerless is rarely open or direct. The reason being that open and direct critique would lead to quick and often violent retribution by the powerful.  Thus, resistance of the less powerful is regularly veiled and indirect.  A similar expression of this dynamic existed in the political landscape of the ancient Greco-Roman world. Political critique of Greek monarchs or Roman emperors would often bring swift retribution, retribution that included damnatio memoriae, confiscation of property, exile, forced suicide or execution.  In the Roman world, informants were rampant, and thus people needed to take extreme care in saying something negative about the Roman imperial family.  Such a climate led to the use of figure speech as a form of engaging in political critique.  Figured speech was a common part of one’s education in rhetoric (see Quintillian [Inst. Or. 9.2], Ps-Demetrius [Eloc. 287-95], Ps-Hermogenes [On Invention 4.13], and Ps-Dionysius [Ars rhetorica 8-11]). It involved creatively saying or arguing one thing while actually intending or implying something quite different (quite often the opposite!).  This strategy for political critique is articulated well in Ps. Demetrius:

Often when what we say is directed toward a tyrant or someone who is violent in some other way, and when we want to censure him, we are compelled to use figured speech . . . Flattery is shameful. Direct criticism is risky. The best course is the middle course: figured speech. (Eloc. 289, 294)[2]

And such is further evinced by Quintillian:

You can speak well and make open statement against the tyrants we were discussing, provided the statement can be understood in another way. It is only danger you are trying to avoid, not giving offense. If you can slip by through ambiguity of expression, there’s no one who won’t enjoy your verbal burglary. (Inst. Or. 9.2.66-67)[3]

One particular use of figured speech for critiquing a current tyrannical ruler was describing the similar behavior of a deceased tyrant.  Ps. Demetrius describes this practice:

Since powerful men and women dislike hearing their own faults mentioned, we will not speak openly, if we are advising them against a fault, but we will either blame others who have acted in similar way, for example, in addressing the tyrant Dionysius, we will attack the tyrant Phalaris and the cruelty of Phalaris . . .” (Eloc. 292 [Innes, LCL])

One could also describe the deeds and behavior of a deceased ruler who was highly esteemed as a means to highlight the failings of a current ruler (see for example Philo’s praise of Augustus in his Embassy to Gaius, 153-58).  Thus, deceased rulers often became a tool one could use to engage in political invective without appearing to do so.

This use of figured speech brings us back the way in which Matthew’s characterization of the Herodian family as tyrants might function.  Such characterizations could very well be expressions of figured speech, through which Matthew is using deceased tyrants to critique a present one.  Audiences were trained to look for such critiques, and thus, regardless of the evangelist’s intentions, it is quite plausible that many of the readers/hearers of Matthew’s Gospel could perceive the critique of a living tyrant in Matthew’s depiction of deceased ones.  One need not look far for possible objects of critique.  If Matthew was written in the mid-eighties CE, as many suggest, then a figure like Domitian, who was widely perceived as a tyrant, could be a likely candidate.  Even Vespasian or Titus might be possible candidates, particularly given the role they played in the destruction of Jerusalem and the Jewish Temple.  Regardless of the Gospel’s specific target, that Matthew used the Herodians as a figured critique of a reigning tyrant is a strong interpretive possibility, one that should be considered in assessing Matthew’s Gospel and its response to the Roman imperial world.

[1] This blog entry is an abbreviated form of a forthcoming essay entitled “Roman Rulers as Characters in Matthew’s Gospel: Characterization, The Tyrant Trope and Political Critique” in Character Studies in the Gospel of Matthew (Craig Anderson and Matthew Hauge, eds.; LNTS. Bloomsbury/T&T Clark).