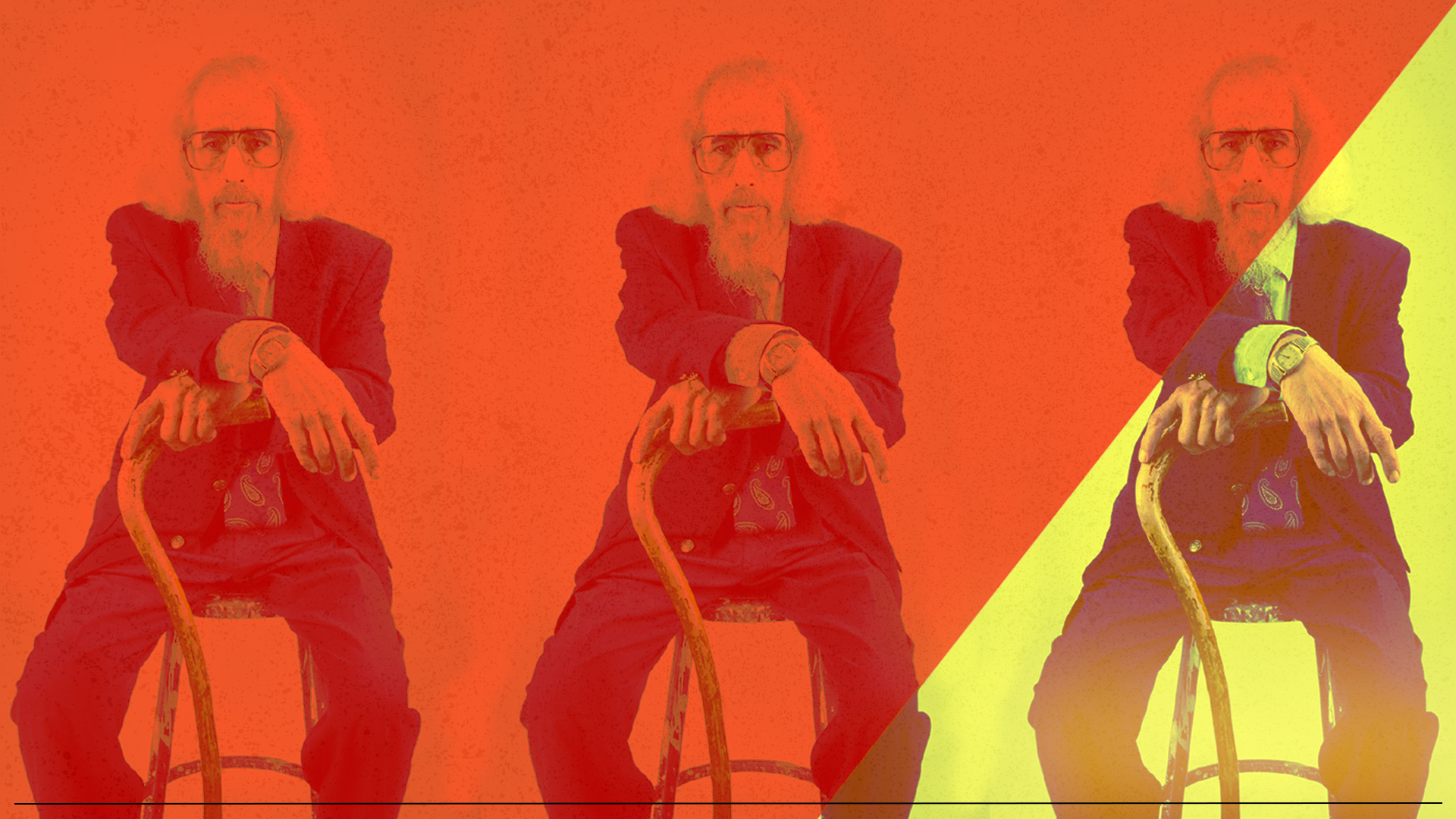 There was always something decidedly Dickensian about J.Z. Smith. I did not know the man, so I am not referring to any perceived eccentricities. I have no idea how convivial he was around a Christmas tree. And I’m not referring to his rather famous sartorial choices—for that I am more inclined to invoke Tolkien. I am, instead, referring to his scholarly vocabulary and syntax. Certainly, if one is familiar with Smith’s oeuvre, there is a fair amount in his writing that stands apart from “traditional” academic style and structure. And, while I find him to be an exceptionally clear and systematic writer, there are nonetheless occasional turns of phrase or allusions that one might argue are charmingly antediluvian.

The aptly titled Drudgery Divine (1990) offers a compelling example. Smith begins his first essay “On the Origin of Origins” by delving into the relationship between Thomas Jefferson and John Adams: “It must surely stand as one of the most touching moments of rapprochement in western history. Two men, once close friends and colleagues, then bitter political opponents, had drifted apart. For some dozen years they had exchanged no word.” (2)

I reflect on this essay in some detail in my recent book The Origins of Early Christian Literature—which is to say that I read these opening lines countless times as I prepped my manuscript. Each time, I would stumble over this last sentence, particularly the placement and structure of “no word.” The phrasing resonated with me because of its artfulness, but also because it seemed curiously familiar.

Recently, I realized that I had encountered a similar grammatical structure—and sentiment—in the alternate endings of Charles Dickens’ Great Expectations. Dickensian stans and scholars will be familiar with the history of closing lines of the novel, which Dickens revised upon receiving critique from trusted friends and editors. His “original” ending (spoiler alert) was a bittersweet and chance encounter between two would-be paramours, now chastened by time, and unlikely to be reunited. Judged too callous, he rewrote the conclusion with the first published edition ending instead with Pip, the protagonist and narrator, musing on his love, Estella:

“… I saw the shadow of no parting from her.”

Later editions would alter this line to:

“… I saw no shadow of another parting from her.”

The passage intends to convey ambiguity regarding the reunion of these formerly close companions. Thus, Dickens’ idiosyncratic locution of “no parting” and/or “no shadow” are designed to deliver a certain tension between the characters’ estrangement and intimacy. As one scholar of Dickens’ language play describes, such constructions echo “syntactic limbo,” “negated negativity,” “self-displacing grammar,” and the “delayed logic of… transitive grammar.” In other words, the phrasing here is a bit tortured, even for Dickens.

Note that Smith is dealing with similar themes in his treatment of Jefferson and Adams; estranged colleagues and friends, reuniting late in life, chastened, and rekindling a relationship that, as Smith describes it, “might well be expected,” (2) given their shared history.

I cannot in good faith or academic standing posit on the basis of some unusual negations that Smith was intentionally invoking the closing of Great Expectations with the opening salvo of Drudgery Divine—although, I confess that I like to think Smith was this clever. As I noted at the onset, I believe this is but one example of many in Smith of a certain Dickensian flare. Should such an algorithm exist, a wholesale comparison of the literary corpus of Dickens with Smith’s scholarly output might yield some interesting results, and I certainly wish he were still with us to answer himself whether his stylistic echoes were deliberate.

That said, Smith may have left certain clues beyond the written record, notably in an interview in Willi Braun and Russell McCutcheon’s Reading J.Z. Smith: Interviews & Essay (2018):

“I love hearing [words], speaking them, above all, reading them… I have been told that my early formula, ‘Reading makes me eat,’ resulted in my mother sitting by my highchair or small table reading aloud to me through every meal hour. As she had scant patience with children’s literature, she read to me systematically, volume by bloody volume, from a set of the collected works of Charles Dickens.” (115-116)

It is unclear whether his emphatic “volume by bloody volume” underscores the burden of this undertaking upon the reader or the eater. As a parent of a finicky toddler, my sympathies are with the reader in this scenario, but I digress.

Those familiar with the field of early Christianity and New Testament studies might find my speculation in this piece methodologically reminiscent of the two-source theory. But my concerns are not so parochial. What interests me are the boundaries we draw around professionalization and genre specification in the guild: What kinds of writing, citations, or allusions are considered acceptable to the field at large? And, perhaps more importantly, who is afforded the license to both determine and stretch those boundaries? While my hypothetical on Smith’s use of Dickens may seem little more than quaint, as it concerns these questions, it functions a bit like a Rorschach inkblot. Whether one finds the exercise interesting or uninteresting, edifying or just one more example of the self-referential fallacy of the Romantic author-genius, says a bit about how we are primed to process both canon and change within the academy.

The sociologist Pierre Bourdieu touches upon these and related questions about the mechanics of intellectual culture in his Homo Academicus. One of his key theses concerning the phenomenon of the academic “figurehead” comes in the form of a revealing paraphrase of Hobbes: “reputation of power is power” (91). Scholars with cultural and reputational capital are in a better position to push the institutional boundaries of something like genre (i.e. academic writing or speech), than those outside of traditionally dominant spheres of influence. Thus, an established scholar can use wordplay, literary allusion, or botanic principles and be heralded a mainstay or an original thinker; another dares to cross institutional boundaries into performance theory and incites controversy or even correction. And we each play a role in delineating and holding those boundaries:

“The secret resistance to innovation and to intellectual creativity, the aversion to ideas and to a free and critical spirit, which so often orientate academic judgements… are no doubt the effect of the recognition granted to an institutionalized thought only on those who implicitly accept the limits assigned by the institution” (95)

To my mind, Bourdieu insufficiently interrogates the role factors such as race, ethnicity, gender, sexual orientation, disability, and age can also play in these dynamics—which is not to say that they go unacknowledged, but they are not the principal concern of his investigation. In recent years the field has certainly taken steps towards acknowledging implicit bias in how we collectively establish our standards and figureheads. Additional work in allied disciplines has also set a path forward. But we should not fool ourselves that this is not a generational challenge.

At another juncture in Homo Academicus, Bourdieu reflects on the practice of “succession” or the “reproduction of the corps”; writing in Paris in the late 1980s, he describes the effect of time on prestige within the institution: “the generation which will come to power in the [1970s], depended on the registration of a thesis topic with one of the Sorbonne professors of the [1950s], who thirty years earlier were attached to [the late nineteenth and early twentieth centuries]” (93). This is something I attempted to acknowledge in my own recent work when I noted that New Testament studies is merely two or three generations removed from figures like Martin Heidegger and, as such, “we still have much work to do in reflecting on the fraught history of our field, its influences, and its influencers” (xiv). If Bourdieu is correct that each generation in power represents roughly one hundred years of inherited cultural influence, then without critical self-reflection and a willingness to challenge our accepted methodologies and points of reference, we are each a bit like the Dickens’ eponymous signalman, idling and recurringly haunted.

For New Testament studies, beyond the Romanic legacies (particularly of the German school and its political consequences), these specters also include arguing for the rapid institutionalization and cohesion of early Christian groups, as well as presumptions about the legitimacy of oral tradition. Fantasies about the uniqueness of early Christianity, and uncritical acceptance of its own constructed myth of origins, has created much mischief in our field, drawing us away from a truly historical understanding of the rise of the Jesus movement. At end, what writings like the canonical gospels present is evidence of literary influence and dialogue among authors. At times this evidence is stark, as when certain vignettes are only slightly altered by each writer according to the parameters of their knowledge or interests. And, in some cases, adherence to the parameters of literary tradition is evident in their allusions (e.g., the empty tomb)—perhaps not unlike detecting references to modern classics of the western literary canon in the work of a famously old-world academic.